In spite of a bit of a snafu with an error found too late to fix, Renfrew #2 is finished, and I'm a happy camper :)  I was going to give a prize to whoever caught the error first, but I think it's not obvious in these photos (and I'm too lazy to take more).  I guess that's a good thing, yes?   That it's not obvious, not that I'm lazy.... 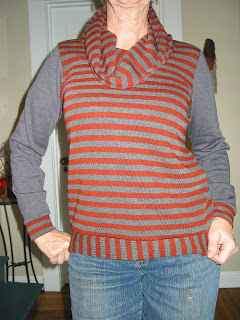 The stripey fabric is a stable, double-sided sweater knit - I think there's some wool involved, because I'm realizing that the cowl is making my neck itch just a bit :(   A burn test indicates some synthetic as well, so it's a blend of this and that, and maybe some of those.     The good news is that the flip side (worn next to my skin everywhere BUT the cowl) is super soft and yummy feeling :)   UPDATE:  I found a swatch of the stripey fabric in a different colorway - it's a Poly/Acrylic/Rayon/Wool blend from Fabric Mart (2 years ago).  The grey on the sleeves is a ponte - also very yummy feeling.

I swear that I am going to start keeping better records of my fabric purchases, so that I will know the content!   At least, I will record it if the info was there when it came to live with me.  (Note to self - next month's Habit Shift will be something about fabric records...) 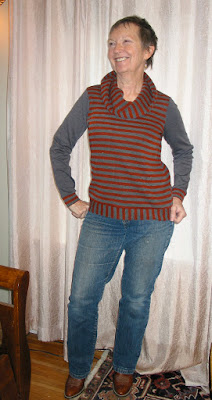 High on the priority list of new-projects-to-sew-because-I-NEED-them is Jeans.  You think?  Also more nice sweaters, a new handbag or two, work t-shirts, jammies and underwear.   Not necessarily in that order.  But all desperately needed!  Like....now.  :(

Back to the Renfrew.   Changes I made after Number 1, posted here, were the promised sleeve cap alterations (could still use some tweaking), and I shortened the length.  This was not such a good thing, because this knit is SO much more stable than #1!   It has virtually no stretch in the length, and about 1/5 the stretch in the width.   I know these things going in, but I think a little bit of adjustment will do the trick, when a LOT of adjustment is really what's needed.  I'll learn.   Eventually.

This is a size 10, but I sewed the side seams at about 1/4" instead of the 5/8" called for, and it was just barely adequate.   I cut the length of this one about 1" shorter than #1.   Here's the difference between stability and stretchiness: 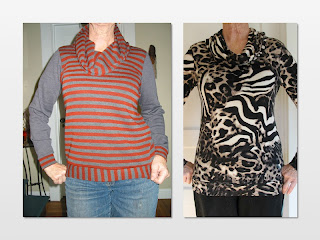 Just for variety, I cut the cowl and the waistband on the cross grain, meaning they had very little stretch.  I cut the waistband a bit longer to accommodate for this, and eased the body of the top into the cowl & waistband as I sewed them.  It worked fine, and I like the look.  The sleeve bands I cut with the stretch going around the wrists, for ease in pushing up the arms (which I often want to do - but not today!   This cold, grey, cold, rainy, cold day....) 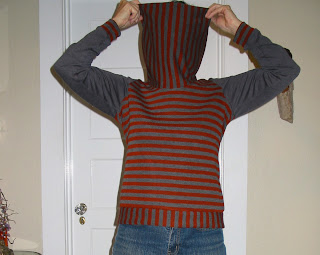 I think it would be fairly easy to adapt this cowl into a simple hoody, and I think I'm going to give that a shot.  I don't have a sweatery hoody, but I'm wearing the fleece hoody bed jacket I made last year every night, and I'm LOVING it!   Need a warmer day version.  Yup, need.   On the list. 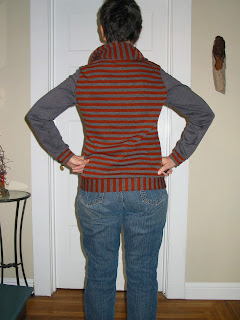 Yup, those armscyes definitely need more tweaking.   Also, did I mention that I need new jeans?

I'll leave you with a little kitty story - I think my blog has had a dearth of cat pics lately, after all...

This is Mitzi, the Mumsy's kitty (who seems to be allowing me to settle into the role of New Mom quite comfortably - finally!)   The bag she's in must have picked up some very enticing scents in its journey out and about last night, because she was exploring it with great interest: 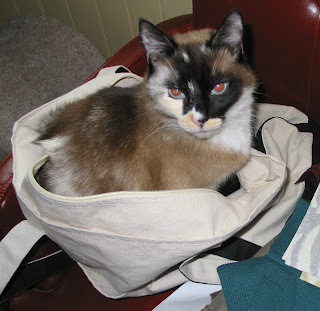 By the end of the Renfrew photo shoot, she had claimed ownership of the bag. 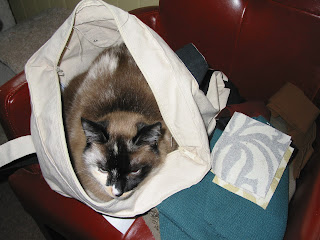 And now, at the end of the blog-writing, she looks to be settled in for the duration.  I think that only a call for food will get the cat out of the bag at this point. 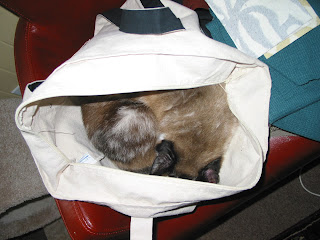 I have one frivolous item cut out and ready to go, and then - honest - I'm focusing on necessities for awhile!

How about you - is it frivolity or necessity on your cutting table at the moment?  We do need a mix of both, don't you think?
Journaling by Jillybejoyful at 3:38 PM

Were you planning to cut the sleeve bands with the stripes in the opposite directions as well? Love the picture of the cowl up over your head!! That is too funny. The cowl with long sleeve version of this is definitely warm.

I wanted the stretch in the sleeve bands, so I cut them as intended. I can see making this version out of a REALLY cozy warm fabric, for my go-to cold weather sweater!

This is super cute! I too make mental notes, that somehow I dont always compensate for. Why is that?
I need some jeans and underthings desperately. The underthings seem the natural place to start. Today I pulled out my bra pattern so stay tuned.
Your kitty pictures make me miss mine. Can not have them anymore due to allergies.... sigh

I sew almost entirely necessity (or as I refer to it bread), I am a Taurus and nothing if not practical. I wish I could be one of those people who sew for the life they want instead of the life they have. Can't do it.

Thanks Lynne :) I think I need to write those mental notes down more often - somehow a piece of paper seems more "real" than my brain....

Sorry about the cat allergies - that would be a super hard one to take for me! :(

Celebrate your practical streak! I think it's uber important to honor (and appreciate!) who we are :) I just wither without lots of variety, so I guess I was really speaking for myself, but you're very right in that we all have different needs. :)

That's a totally cute top. I don't go a lot of places to need much "icing". I sew a lot of "cake". I just drafted a SureFitDesigns pant, and am working on making jeans THAT FIT!

Yay on jeans that fit! The first (and only) pair I made fit quite nicely (not the pair I'm wearing above), but since they were a "practice" pair, I didn't use a jeans zipper, and wouldn't ya know it, the zip broke. Hmmm.....I'm sensing a theme here.....if you think it might be wearable, then do it right in the first place!

This top looks great on you, even with its shorter length. A good cake item.
I sew mostly cake, having very little need or use for frosting. Special occasion outfits tend to be worn once and languish forever in my closet. Right now I'm working on a striped top with the stripes going in different directions - imagine that!

What I love about your cake is that it always has a delicious dollop of icing on it. That, I realize, is my favorite. Practical, wearable items that taste delicious and always have a cherry (or something fun and yummy) on top!

The placement turn out very interesting and the hood it's just awesome... The shorter lengh suits you better

Nice looking top - at first I thought the cowl was large enough to convert into a hood, so it looks like it possible.

Love the top, you look like a teenager!!!!!! Actually, with that happy smile of yours, you always look young and hip :)
Your kitty is so beautiful. I had a siamese cat named Jasper. He lived to be 18 years old.

Mitzi is so cute! I love cat pics! Your top is fantastic -- the mix of stripes and solids is cool, as is the cowl. Looks so cozy and perfect for the chilly weather we've been having!

I'm more into sewing frivolous stuff -- I don't make workhorses such as t-shirts and jeans, but I love to find interesting fabrics and make things that aren't easily found in local shops.

What a cute top! I like the animal print too. I am making my first Sew a holic pattern right now (pants). I may have to try this for the hips and waist issue you mentioned.

Love your Renfrew! It looks great in the two colors! And how adorable is Mitzi!!

No one has accused me of looking like a teenager for (mumbledymumbledy) years! I'll take it lol! :D

Love your Renfrews Jilly! I just ordered this pattern this week & have a scrumptious purple knit just waiting to be transformed into a fabulous cowl top. I am really disappointed to hear that the sleeves are symmetrical...seems like an unnecessary shortcut. In my opinion, symmetrical sleeves never look as polished. And drafting/altering sleeves scares the bejeebus (how would one spell that??) out of me.

You can do it!! One possibility is to use a pattern that you like the fit of, and transfer the sleeve cap and armscye to the Renfrew. I'm a long way from knowing how to work with each new fabric & pattern to perfect my fit, but I get better with each new attempt. We have to start somewhere, right?

Oh, I adore your scrumptious new top!! I really love that stripe-y version most of all. It sure looks beautifully cosy and warm!
Re fabric content; "if" I think of it (which is not often btw!) I take a closeup photo of the composition tag sitting on top of the fabric with my phone. But usually I just remember... since I seek out and preferentially buy mostly naturals like linen, silk and cotton it's no biggie to pick what it is, if I forget the photo :)

That top looks so cozy and snuggly, I wonder when the cat will claim it.

Tasia sure hit one out of the park with Renfrew, didn't she? And I thought the Minoru jacket was a popular one. Your "practice" tops sure look very attractive and functional! It's so interesting that each knit fabric has it's own stretch factor. Thanks for the kitty fix too. I miss having them around - but not enough to adopt another one. Yet.

When I got back into sewing I assumed I would just sew with natural fibers too, as I used to....but then I discovered knits, and polys that didn't feel the way they did in the 60's....and now I'm in trouble lol!

My linens, silks, cottons, and wools aren't usually too much of a problem, but there are an awful lot of blends out there these days!

lol as soon as I leave it on a chair!

I'm hearing in your voice that there will be another one......how can you resist for long? ;D

I used that same yummy stripey fabric in 2 tops this December! It is such a pleasure to wear. Thanks, I needed some "Joyful" in blogland these days. C U on your next post :) 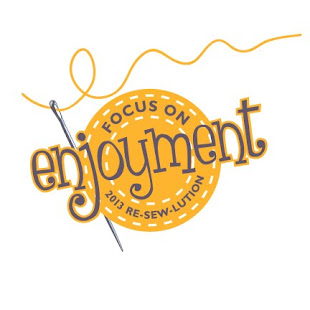